This is a list of the 2006 Clatskanie People's Utility District (Oregon) Employees List and their job title and salaries.(39 employees)

According to an Oregon open records guide webpage, there appears to be no enforcement provisions in the Oregon public records law. http://www.rcfp.org/ogg/index.php?op=browse&state=OR

Here's the freedom of information request letter I sent to the Clatskanie People's Utility District (Oregon). 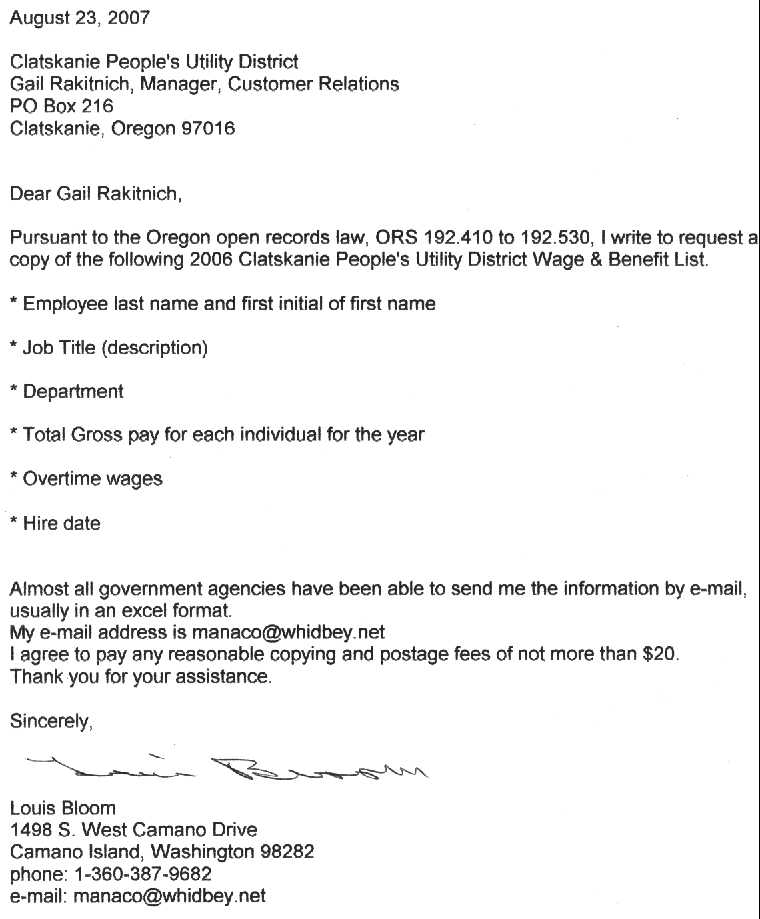 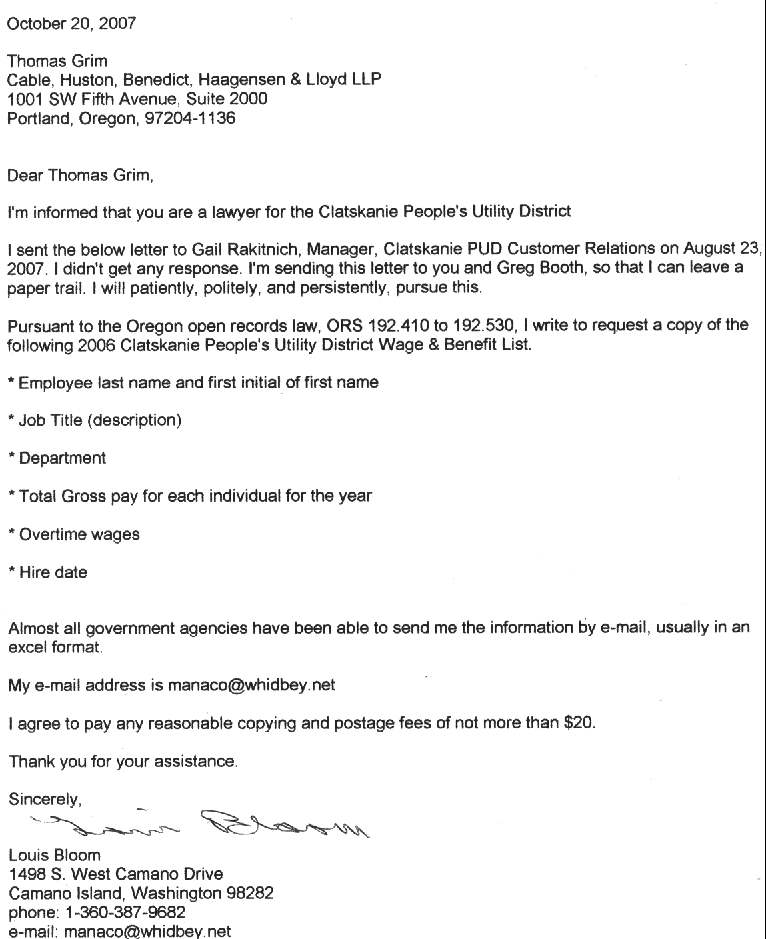 Here's the freedom of information request letter I sent to the Clatskanie People's Utility District (Oregon). 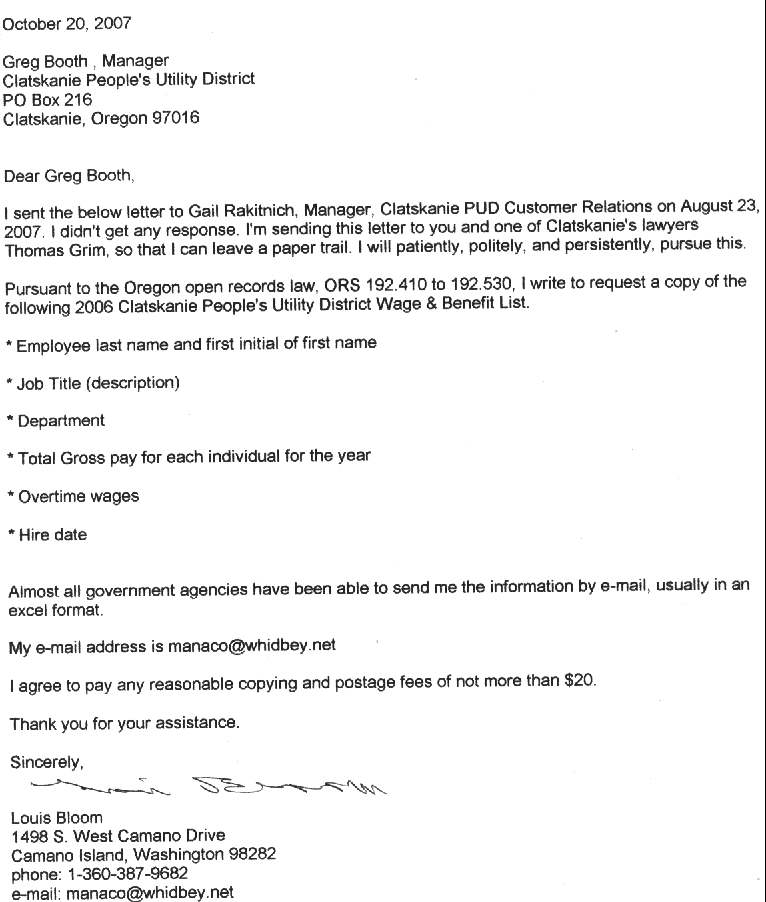 below is an email i sent to an oregon attorney general website. i received no response from them except for an "auto response" that said they received the email.
From: louis bloom
To: doj.info@state.or.us
Sent: Thursday, November 08, 2007 1:45 PM
Subject: oregon open records law
Dear Oregon Attorney General person,
I wrote a request letter in August 2007, to the Clatskanie People's Utility District, under the Oregon open records law, ORS 192.410 to 192.530.
I asked for the names, job titles and salaries of their employees.
I wrote two follow-up letters in October 2007, but I've received no response.
I've written hundreds of requests letters to Washington State government agencies, for their names, job titles and salaries, and I've received responses from all the Washington State government agencies I've requested data from.
I've uploaded Washington state government salary information to my website at www.lbloom.net
Apparently there are no enforcement provisions in the Oregon open records law.
If only a lawsuit would make an Oregon public agency respond to a simple "freedom of information" request, the Oregon open records law appears to be worthless.
thank you,
Louis Bloom
1498 S. West Camano Drive
Camano Island, Washington 98282
phone: 1-360-387-9682
e-mail: manaco@whidbey.net 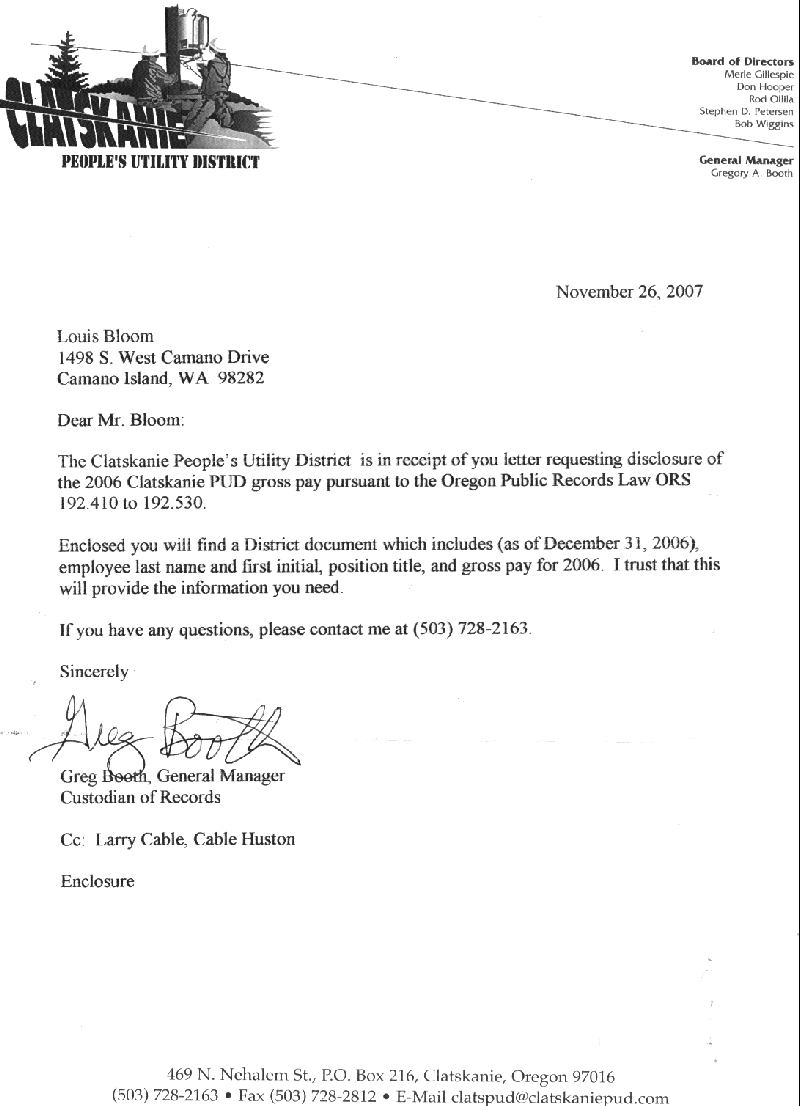 By clicking on the rainbow colored square icon, you can see information about the people who look at these webpages. These statistics report meters are free to anybody.

Clicking on the above picture will take you to a page about the webmaster.
A freedom of information letter template is at http://www.splc.org/foiletter.asp
Washington State newspapers have detailed information about access to public records at http://www.openwashington.com/
Here's information on Washington State websites about counties, ports, school districts, cities, ect...
In Nov 2002, the Wa St Court of Appeals, ruled that government employees names cannot be kept secret.